Warning: "continue" targeting switch is equivalent to "break". Did you mean to use "continue 2"? in /www/wwwroot/pestmanglobal.com/wp-includes/pomo/plural-forms.php on line 210
 Pestman hexaflumuron termite bait

Pestman hexaflumuron termite bait mixed with attractant and pesticede. Lured by the termite bait, termites eat the bait and carry it back to their colony, then feed the bait to other termites in the colony. Eventually the whole colony termites will be eliminated.

A large number of experiments and years of practical application prove that the most important feature of the effective ingredient hexaflumuron in the Pestman hexaflumuron termite bait is that it can eliminate the entire termite population. Hexaflumuron is an inhibitor of chitin synthesis, which inhibits the synthesis of chitin, prevents termites from peeling normally, and eventually leads to their death. Because hexaflumuron acts slowly and has no evasion, the worker termites do not notice after feeding the bait, so they transmit hexaflumuron to other termites by feeding habits. The  feeding habit of termites makes a small amount of effective ingredients quickly poison each individual in the entire population, leading to the elimination of the entire population. The elimination of the ethnic group occurred when all the worker termites began to peel after ingesting hexaflumuron.

Dosage: 50~150 gram (1-3 bags) to eliminate 1 colony. Cover the tunnel of the termites every 50g and let the -termites feed on themselves.

Hexaflumuron is an insect growth regulator that can prevent termites from forming new skin after molting, and the surface becomes thin and brittle. It can kill termites by inhibiting its growth and being undetectable by itself. The termite colony mainly relies on worker termite to find and transport food. The hexaflumuron bait is supplemented with termite's favorite cellulose, and termites can easily feed on it. When the worker termite find the bait, they will transport the "food" back to the nest for their companions to eat. All termites in the nest feed on the bait, and the eggs will not be able to hatch after reproducing queen to eat the bait, thus achieving the whole nest destruction killing effect. 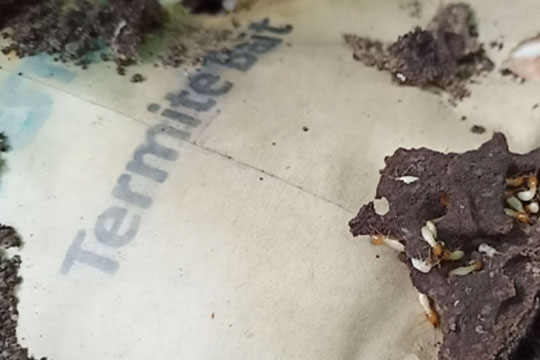 1.Dig a large hole in the bait bag to ensure that termites can enter the bag.
2.Fix the bait bag with tape on the termite tunnel with termite activity.
3.After a few days, observe whether termites enter the bag to feed. If no termite enter, check whether the location is installed correctly. 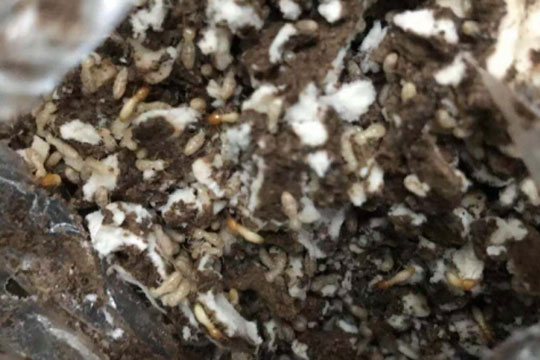 HOW TO CONFIRM THE EFFECT:

Elimination of termites
Termite die within 30-75 days of eating the bait.

The following indicators can be used to determine whether an ethnic group is eliminated:
- Worker termites have been feeding the bait continuously for at least 2 weeks, and no worker termite have been seen for at least 2 weeks thereafter.
- Other indicators may indicate that the ethnic group is about to be eliminated. These indicators are: the proportion of soldier termites increased and the proportion of worker termite decreased; the body color of termite individuals became significantly white, especially for worker termite, under the magnifying glass, white small spheres (uric acid crystals) were visible under the surface of the body; Termites walking slowly and aimlessly. These phenomena should be recorded during each survey to facilitate the determination of the elimination process of the termite population. 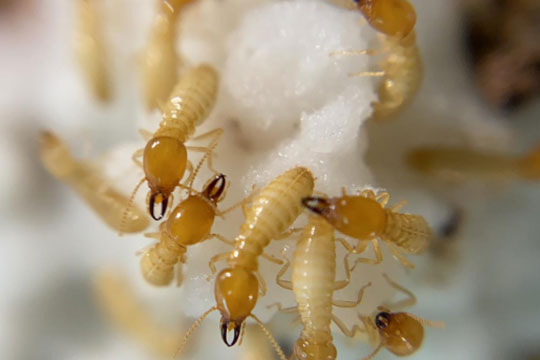